Find An Alternative to the Suez Canal Blockage 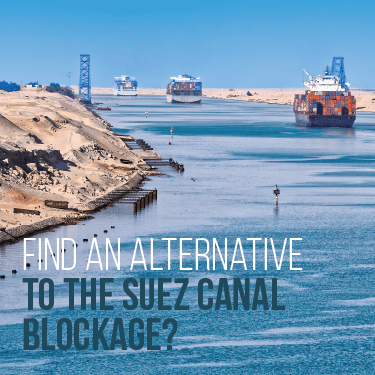 The Suez Canal blockage is causing major issues for importers all ove the world. Thankfully though, alternatives exist to deal with this disruption. Learn what alternatives are available and which ones best suit your needs.
By
USA Customs Clearance
March 26, 2021
Share This Article

If you own a business that imports products or are associated with the transportation industry, chances are you’ve heard about the recent Suez Canal Blockage. Due to the canal’s heavy usage and involvement in ocean shipping, you might also have been directly affected by it. Finding an alternative to the Suez Canal is a challenge, but one that’s not impossible.

There are a few alternatives to shipping products via the Suez Canal. These include shipping products through the air via a cargo plane and using nearshoring instead of offshoring. Picking the best alternative for your situation should be a strategic decision based on your specific needs.

Our guide below provides you with context on the Suez Canal blockage, as well as recommendations on choosing an effective alternative.

If you need immediate assistance in finding an alternative, our team is here to help. Contact us today and our customs and logistics experts will find the right solution for you.

What Caused the Suez Canal Blockage?

Many people probably don’t know why the Suez Canal is so important to world trade — until it recently started popping into news feeds everywhere. However, this man-made waterway constructed over 150 years ago and stretching more than 100 miles in length is integral in allowing ships to bypass traveling all the way around the African continent and easily connecting the Red and Mediterrean Seas for easier trading.

On March 23, 2021, the ocean vessel Ever Given ran aground and got stuck sideways, blocking the entire Suez Canal in Egypt. Poor weather conditions through a dust storm and high winds are thought to have contributed to its running aground, and the mishap is estimated to affect $9 billion worth of goods daily due to the canal not being able to be traversed.

The Ever Given is a truly global ship as one of the largest container transporters in the world. It was built by Japanese company Shoei Kisen Kaisha, is operated by Evergreen Marine, a Taiwanese outfit, managed by a German company and registered in Panama. This is also not the first time the Ever Given has been involved in an incident. In 2019, minutes before high winds closed the Elbe River outside of Hamburg, Germany, the container vessel heavily damaged a ferry boat after striking it.

When Will the Suez Canal Reopen?

Once the Ever Given is able to be re-floated (basically fully returned to the water), it should be able to continue its journey to Rotterdam in the Netherlands from the port of Tanjung Pelepas in Malaysia. As of Friday, March 26, efforts have been underway to dislodge the ship from the sand it’s stuck in but those efforts have so far been unsuccessful.

Officials are using and exploring the use of numerous tools and vehicles to force the ship out including:

Still the current effect and the future effects this blockage has and will have is of no small matter. While people might think about the toll this will take on businesses currently undergoing these trying times, the rolling effects will eventually find their way to the end of the supply chain — the consumers. Some items might become more scarce, at least in the short term, as well as more expensive over a (hopefully) not long period of time.

How Many Ships Are Affected by the Blockage?

Given that 20,000 ships use the Suez Canal on a yearly basis, it is estimated that nearly 55 ships are either directly or indirectly affected per day by the Ever Given being lodged in the important waterway.

Per week, that’s 385 vessels of one kind or another, making it of paramount importance for the mega-cargo ship to stop blocking the Suez Canal. But it’s not just the number of ships that are being inconvenienced. It is also the wide array of commodities that the canal is used to move between many points around the world.

Fuel, food, consumer goods and even things considered essential such as toilet paper are either not moving at all right now or might be forced to take much slower and even costlier routes that the Suez Canal was built for the expressed purpose of eliminating.

Providing some small comfort to those who rely so heavily on goods shipped via the Suez Canal — this is the first time in the waterway’s history it has been blocked by watercraft, so hopefully it’s not a recurring incident. There was one other instance in history of the Suez Canal being out of commission. This occurred from October 1956 to March 1957 during the Suez Crisis, which was due to a war between Egypt and Israel and not a ship stuck in the waterway.

What Alternatives Are Available to the Suez Canal?

The most viable alternative to traversing the Suez Canal is also the reason the canal was constructed in the first place — going all the way around Africa. The Suez Canal was built over a 10-year period and finally opened to ships in 1869. This was so ships had a bypass in both directions from extending their journeys by thousands of miles going around the entire continent of Africa.

Unfortunately, with the Suez Canal currently blocked, this is the most likely route to use for goods coming from or going to Europe, Africa and western Asia. Ships will go all the way south around South Africa’s Cape of Good Hope then go up the west coast of Africa before being able to reach their destinations. Both the Atlantic and Indian Oceans will still be in use.

An alternative solution that can work in the long-term, but may not be possible in the short-term is exploring nearshoring options. Nearshoring is a supply chain approach that utilizes manufacturers and suppliers from another country, but much closer to the end point destination. Generally, this means the origin and destination are connected by land and don’t have to be traversed by air or sea. A common example of this is the U.S., Mexico, and Canada which are frequent trade partners all connected by land.

Benefits of nearshoring include:

It may be possible to quickly find an alternate supplier to source your goods from. For many dealing with a delay like the one caused by the Suez Canal blockage, this may be the best alternative.

To learn more about a common nearshoring option, check out our article on Importing products from Mexico to the U.S.

Get Help With Alternatives to the Suez Canal Blockage

If you are looking for help due to the Suez Canal blockage, look no further than linking up with USA Customs Clearance, powered by AFC International and R+L Global Logistics. Whether you’re going from Saudi Arabia to Spain, or Italy to India, we can help you navigate the newfound complexities of finding the right global route for your goods.

We can plan out the best route with our vast knowledge of global logistics and also help you clear customs in the country your goods are destined for. USA Customs Clearance will assign a single agent to you that you’ll deal with throughout the process. Whether it’s a shipping container shortage, or something equally specialized, we’ve seen it and done it before.

If you need even more specialized attention prior to onboarding with us or just want to brush up on your customs intelligence, you can book a 30-minute import or customs consulting session where you’ll have the undivided attention of one of our brokers to get answers to all of your questions.

Reach out to our team today to get the support you need.