Don’t Be Sheepish: How to Import Wool 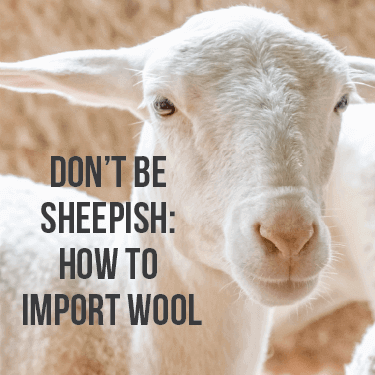 Wool is an essential component of many commonly used textile products. Importing wool into the U.S. can help to meet consumer and business demand. Find out what the rules and regulations are and how to safely import wool.
By
USA Customs Clearance
September 8, 2021
Share This Article

Winter is coming. And on a cold day, there’s nothing quite like snuggling up in a wool blanket or sweater for warmth and comfort. That means it’s time for those in the business to start thinking about how to import wool in preparation for the seasonal demand.

Thinking about how to import wool doesn’t have to be overwhelming. Importing wool involves following guidelines set by CBP (Customs and Border Protection) and USDA’s APHIS (United States Department of Agriculture Animal and Plant Health Inspection Service). There are some additional rules of origin to follow depending on where your wool is sourced.

Even with the guidelines, there’s nothing to be sheepish about when considering how to import wool. Let’s dive into the details about wool imports, from sourcing to needed documents to how a strategic import partner can help.

Is wool imported? Yes, absolutely. Wool is an often-imported commodity.

In fact, numbers show that wool is the 582nd most traded product in the world. That means this fluffy artifact is constantly coming and going from country to country.

Top Importers of Wool By the Numbers

China is the world’s largest importer of will, taking in 62.3% of the world’s wool production, according to 2019 data. That leaves a paltry 37.7% for the all the other wool-importing countries.

After China, the top 5 importers of wool include:

India, Italy, Czechia, the U.K., and South Korea account for nearly 22% of all wool imports. After factoring in China’s share, this means 84% of the world’s wool is accounted for before the U.S. is even considered. Let’s take a look at how much wool is imported into the U.S.

How Much Wool is Imported into the U.S.?

While this might seem insignificant compared to major commodities like minerals, fuels, and oils (worth $241.4 billion) or even pharmaceuticals (worth $116.3 billion), wool imports play a major role in the U.S. economy. There are many uses for wool, from clothing to insulation to fertilizer.

Another important thing to know about wool imports: the amount of wool being imported into the U.S. is on the rise. In fact, U.S. trade numbers indicate that the total imports of wool has risen 481% in June 2021 when compared to year-over-year data from June 2020. This means demand for wool in the U.S. is rapidly growing and creating opportunities for importers.

Wool is imported into the U.S. all year long, however, the volume of wool imported ticks up in the late summer and early fall. This is because increasing retail demand for this warm and cozy commodity increases during the late fall and winter months.

Wool isn’t the only textile imported into the U.S. Learn the ins and outs of textile imports with our complete guide to importing textiles!

Now that we know a little more about where wool is going, let’s look at where it comes from. According to 2019 import data, the biggest suppliers of wool imported into the U.S. come from New Zealand (35%) and Australia (32%).

It makes sense why 67% of the wool imported into the U.S. comes from these two oceanic countries. Numbers from 2020 show that there are about 26 million sheep in New Zealand, compared to only about 5 million people. This means sheep outnumber people 5 to 1 in this bucolic country.

Other countries that export wool into the U.S. include:

Where is the Best Wool From?

You might guess from the volumes above that the best wool comes from New Zealand and Australia. If so, you’d be right.

Merino wool is one of the most luxurious and versatile fibers in the world. You’ll find that 81% of this fine wool comes from Australia, where farmers use sustainable sheep caretaking processes. Cashmere, another fine wool, often comes from China and Mongolia.

Now that we know more about where wool comes from and what countries supply the U.S. with wool, let’s dive into the nitty-gritty on how to import wool. We’ll start with what you need to import wool, go over the process, and explain how a Licensed Customs Broker can help.

What Do I Need to Import Wool?

You’ll need a few important documents to import wool. These documents are needed to stay in compliance with U.S. import regulations set by CBP, the USDA, APHIS, and other agencies.

Some of the documented items you’ll need to import wool include:

Do I Need a Customs Bond to Import Wool?

A customs bond serves as an insurance policy between the importer and the U.S. government that guarantees all duties, fees, and taxes will be paid. You generally need an import bond when the value of the goods you’re bringing into the country exceeds a certain amount or when your imports are subject to regulations or inspection by another government agency.

Because importing wool involves the CBP, USDA APHIS, and other agencies, you’ll need a customs bond when bringing wool into the U.S.

The bond you choose when thinking about how to import wool will likely depend on how often you plan on shipping things into the U.S. from abroad. Still not sure which bond to choose? Consider consulting with a Licensed Customs Broker who can walk you through the process and make sure you have the right documents lined up for your wool imports.

Don't forget to secure your wool import with a customs bond

Get your bond quicky and easily
Get A Customs Bond >

How Do I Import Wool?

There’s more to importing will than getting the right documents ready. Thinking about how to import wool also means working with a few government agencies.

If the wool you’re importing is in textile form, your goods are subject to inspection at the border by a few different government entities. For example

As noted above, a percentage of the wool imported to the U.S. comes from Canada. This means your wool imports might be subject to preferential tariff treatment.  The CPB has gathered information about wool and textile tariffs.

Another thing you’ll need to consider when you import wool is which port of entry you’ll use for your shipment. This can be a little complicated, especially as West Coast port congestion plagues usual the ports you might use normally.

Thinking about how to import wool doesn’t have to be taxing. There is nothing to be sheepish about with the straightforward process and the right partner on your side.

USA Customs Clearance, powered by AFC International, is ready to guide you through the process of importing wool into the U.S. No matter whether this is your first time bringing goods from overseas into the country or you are an experienced importer, our menu of services is diverse and scalable. This means we have a solution for you.

Ready to get the import process started? Reach out how for a hassle-free customs brokerage services quote now and see how a strategic partner can go to work for you.

One comment on “Don’t Be Sheepish: How to Import Wool”