What is a Manifest Hold? (And How to Avoid One) 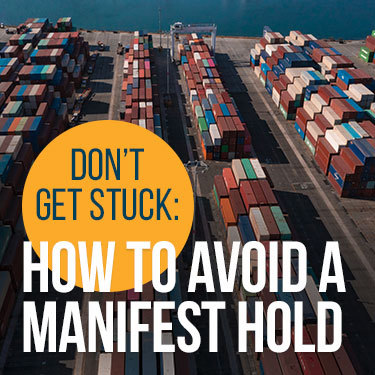 Importers can have manifest holds placed on their shipments for failing to file an ISF on time, missing documents, or incorrect information. Learn more about manifest holds and how a customs broker can help you avoid them.
By
Natalie Kienzle
February 17, 2022
Share This Article

Import delays can be frustrating. The key to avoiding most holds during customs clearance is being aware of what causes them to begin with. There are factors that might be out of your control but certain steps can help minimize the overall length and frequency of manifest holds.

According to U.S. Customs and Border Protection (CBP), a manifest hold may be issued on a shipment for failure to file an ISF on time. Additionally, missing, incorrect or illegible import documents can result in a manifest hold. A hold can result in fines of $5,000 per error and the detainment of your cargo.

See how a proper review of import documents can minimize errors and help your company avoid delays and penalties.

What is a Manifest Hold?

A manifest hold can refer to a few different types of delays. At its best, a manifest hold is a standard delay while a container’s import documents are reviewed for accuracy. In that case, it’s probable the hold isn’t even reported to the customs broker. Most times it lasts less than 24 hours and causes no significant delays in further transportation plans.

Manifest holds are one of four different types of holds that can be placed on incoming imports. Known as U.S. Customs Inspection Holds, they may be issued by the CBP or other government agencies involved in import regulations for specific products.

If the hold has been issued by the Consumer Product and Safety Commission (CPSC), one of five messages will be sent through ACE (Automated Commercial Environment).

The majority of shipments will receive the ‘May Proceed’ message. A good compliance history with the CPSC increases that possibility.

What Causes a Manifest Hold?

The most common manifest hold is issued by the CBP in the event it doesn’t receive an ISF on time or receives an ISF that contains errors. The ISF, or Importer Security Filing, is commonly sent by either the shipmaster or importer. A Licensed Customs Broker being used as the Importer of Record may also submit an ISF.

Other times, the CBP will issue a random manifest hold for a spot inspection. Since it’s logistically impossible for the CBP to independently verify every container against its declared manifest, random inspections are conducted. If your shipment just so happens to be one of these, there really isn’t anything you can do.

The CPSC will issue a manifest hold for shipments of higher interest, such as those under stricter regulations. The review process for CPSC holds is separate from standard manifest holds. More information on resolving CPSC holds can be found on our other page.

Want to Make Sure You Avoid a Manifest Hold on Your Imports?

Speak to one of our Licensed Customs Brokers and get personalized, 1-on-1 help importing your goods.

Will I Be Fined for a Manifest Hold?

Any cargo hold issued by the CBP or a related government agency can result in a penalty fine. Whether you receive a fine or not depends on why the hold was issued in the first place, the nature of the mistake (if there is one), and how many mistakes were found.

Manifest mistakes can cost a shipmaster or importer $5,000 for each discrepancy found. If your cargo is not in compliance with import regulations on a spot check, there are usually hefty fines issued by the overseeing agency too.

Even if everything is in compliance with your cargo, disorganization of your documents or clerical errors may increase the hold time. In some cases, port authorities may even have to transfer your cargo to another facility while investigations are conducted. The inspection may not find any mistakes, but the CBP might still fine you for delaying port activities and for the storage of the inspected cargo.

How Can I Avoid a Customs Manifest Hold?

The best way to avoid the majority of manifest holds is to have a clear understanding of what causes them to begin with. A time delay on your shipments isn’t convenient, but a penalty on top of a time delay can spell financial disaster. Most of what you can do to avoid a manifest hold will also help you avoid penalties and fees from the CBP or related agencies.

Importers should pay special attention to these specific items:

If you are new to importing, get into the habit of double-checking documents and ensuring your compliance with regulations. Frequent importers with a good reputation of compliance are less likely to be caught in a spot check.

For those who only import a few times a year, there is a greater chance of having your cargo randomly checked. Just be sure that all your papers are in order and the hold should get lifted within 24 hours.

Working with a Licensed Customs Broker is a good investment for avoiding holds and penalties in general. A broker can usually walk you through completing important documents or even be able to complete some documents for you. It's almost a guarantee that fees and penalties from errors will cost you more than a customs broker.

For more information on import documents, check out our article, “How to Clear U.S. Customs With Cargo.”

Global trade has made the world a smaller place, but not necessarily a safer one. Ocean carriers, truck drivers, and rail operators have always had to contend with natural and man-made dangers. A growing awareness of the dangers of terrorism to U.S. security and that of its closest neighbors led to the establishment of the Customs Trade Partnership Against Terrorism (CTPAT) in 2001.

The CTPAT became a new tool the CBP could use to put safety regulations in place and enforce cargo security. As a voluntary partnership program, most members of the trade community, public or private, can join. Partners from the U.S., Mexico, and Canada agree to work with the CBP to protect different parts of the trade industry.

Members of CTPAT have to meet certain qualifications to be accepted. Most qualifications have to do with their security measures. Because CTPAT members are thought of as ‘low-risk’ to security, they tend to avoid getting caught in random holds in U.S. ports of entry.

What is the Advance Vessel Manifest Rule?

Officially known as the 24-hour Advance Cargo Manifest Declaration Rule, this applies to vessels that will be transiting or docking to unload at a port of entry in the United States.

The rule was put in place in 2002 and requires shippers (ocean carriers and NVOCCs) to send a cargo manifest to U.S. Customs 24 hours before the containers are loaded onto the ship in a foreign port.

The rule applies whether the cargo is meant to be unloaded in a U.S. port of entry or is staying aboard while the ship docks temporarily on its way to another foreign port. The 24-hour notice window opens once a loading schedule has been set.

If the vessel is making more stops before reaching the U.S., a manifest should be submitted at each port. Changes to the cargo manifests are expected with each additional BoL that gets added.

A shipping manifest has information specific to its onboard cargo, including any special directions. The CBP Manifest Examination Team (MET) needs to review this information for possible risks. The MET also has the authority to put a shipment on hold if they need to ask for further documentation.

If a vessel fails to submit its manifest on time or errors are found, penalties may include:

Each of these penalties is likely to cause not just a time delay, but a hefty fine too. Both would be bad for your profit margins.

What is a U.S. Customs Inspection Hold?

Any shipment hold issued by the CBP directly or on behalf of a PGA is a U.S. Customs Inspection Hold. There are different types of holds based on what triggers them, but they all amount to the same thing. A shipment is prevented from leaving a ship or the port until further investigation by the CBP and port authorities.

The CBP uses a series of codes to identify the types of cargo being held, the status of a hold, who issued the hold, and more. A complete table of these disposition codes is available through the CBP as a pdf document.

What are the Different Types of Inspection Holds?

Aside from a Manifest Hold, there are three other types of holds that may be placed on imports entering the U.S. by sea or air. Much like manifest holds, some of these may be issued as random spot checks.

Strictly sticking to import regulations and maintaining a secure and accurate manifest system can help you prevent some of these holds. Aside from showing you are a law-abiding importer, the fewer holds placed on your shipments, the better you serve your clients.

Want to Make Sure You Avoid a Manifest Hold on Your Imports?

Speak to one of our Licensed Customs Brokers and get personalized, 1-on-1 help importing your goods.

Get Help on Shipping Documents With USA Customs Clearance

Customs manifest holds and audits can cost import companies upwards of $5,000 in penalties for a single shipment. Simple mistakes can turn a profitable venture into a hopeless money pit.

Work with experienced and Licensed Customs Brokers at USA Customs Clearance and invest in the future success of your business. Our brokerage services can help you avoid unnecessary and costly delays that could cost you thousands in lost revenue. Speak with one of our consultants 1-on-1 and get help with document completion, importer of record registration, and more.

Even as some parts of the world struggle to resume normal activities, keep your businesses on the move and free from manifest holds. Speak with someone today and get the help you deserve.