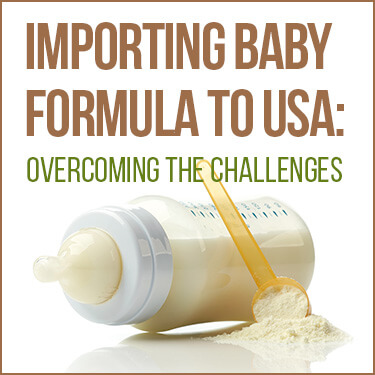 Millions of babies in the United States depend on infant formula for their first year of life. Find out where you can practically import infant formula from in a way that meets current Food and Drug Administration standards.
By
Natalie Kienzle
May 25, 2022
Share This Article

Raising babies is tough on the best days. Raising babies during an infant formula shortage is beyond tough for those who rely on this crucial commodity. Imported baby formula must meet or exceed domestic production standards to pass Customs. While challenging, it is very possible.

The U.S. Food and Drug Administration (FDA) regulates both domestic and imported baby formula. Any imported formula must meet the labeling requirements of the Office of Nutritional Products and Applied Nutrition (ONPLDS). Infant formula manufacturing requirements are set by the Federal Food, Drug, and Cosmetic Act (FFDCA).

Get the details you need to import baby formula and avoid getting products rejected at the port.

The terms baby formula and infant formula are often used interchangeably. For the purposes of this article, both terms refer to formulas designed for the needs of children from birth to 12 months of age.

The American Academy of Pediatrics states children under the age of one should receive the majority of their nutrients from natural breast milk or FDA-approved infant formula. Standard cow milk or other milk substitute is not recommended before the age of one.

At any given point, the U.S. baby population is about 3.5 million under the age of one. If there are shortages in baby formula, it’s a big deal. Of course, not every baby needs store-bought formula. There are many mamas out there that exclusively breastfeed.

For parents who don’t have the option, or don’t want to breastfeed, baby formula is a literal lifesaver. It then comes down to choosing the best options, and many families are looking into imported European formulas.

The market for imported baby formulas has been present, but due to strict FDA requirements, it has remained incredibly small. In fact, of all the food products in the United States, infant formula is considered to be the most regulated.

Some of the challenges preventing widespread import of infant formula include:

The U.S. infant formula shortage is not expected to be a long-term problem, but current needs have people looking more closely at regulation.

These challenges can be overcome whether you are looking to secure a personal supply or import commercially.

It’s recommended that you seek the advice of a licensed customs broker who is familiar with regulated imports and TRQs. Following all legal requirements isn’t only the right thing to do - it keeps imported formula safe for babies everywhere.

For starters, the FDA has a strict list of ingredients for infant formula. There are 29 different ingredients that must be included in all formulas. Each ingredient also has a minimum level requirement. Some of the ingredients also have a maximum level allowed.

The difference between European and American ingredient lists is small, but it keeps brands from approval. Brands made from goat’s milk or based on whole milk, do not have current approval in the U.S.

For others, it's the ingredients that European formulas don’t have which make them appealing. Corn syrup, a sugar commonly used as an additive in American-made foods, is one example. It’s banned in the European Union from being used in milk-based formulas.

As of July 22, 2022, the CBP will allow the duty-free entry of qualifying infant formula. There are no additional safeguard duties being imposed, but duty-free status is limited to specific HTS Codes.

The suspension of duty on certain infant formulas will remain in effect until December 31, 2022. In addition to the import duties, other safeguard fees will also be suspended.

These include the following.

These suspensions are part of the Formula Act, which was passed earlier this year to ease the effect of the baby formula shortage currently affecting the U.S.

Where Can I Import Baby Formula From?

Of course, this severely limits the amounts you can bring in. Most baby formulas are milk-based, so the U.S. Department of Agriculture classifies them as dairy products, a highly regulated commodity.

When declaring your products for Customs, you must state whether you are importing for personal or commercial use. Only baby formula declared for personal use is allowed entry with no issue.

To import infant formula for commercial use, importers need to follow the FDA’s rules governing all food product imports. Not including the specific label requirements, there are still very specific rules for food imports.

The U.S. does import small amounts of baby formula. Foreign production facilities must undergo strict inspections. Failure to meet and/or produce all necessary information results in denied approval. These are described as Good Manufacturing Practice (GMP) Regulations under 21 CFR Part 110.

So long as the ingredients and labeling meet FDA standards, importers can go through with the process. Below is a list of some of the nations that export to the U.S.

Despite the approval, imports from these nations are still very limited. Due to current ongoing conflicts in Eastern Europe, imports from Poland have slowed but there is potential elsewhere. Mexico and Chile have free-trade agreements with the U.S. allowing importers to avoid heavy import tariffs attached to infant formula.

Many people are asking why the U.S. isn’t ramping up imports to cover shortages. Unfortunately, there is no simple answer.

The challenges to importing infant formula are because of strict regulations and its status as a dairy product.

None of these restrictions are new, but they are coming under the mass spotlight now because of shortages.

Existing supply chain issues became worse with pandemic interruptions. A shutdown of the Abbott Nutrition factory in Michigan - responsible for over 40% of all formula produced in the U.S. - caused more issues. It’s a perfect storm of factors affecting a very vulnerable part of the population.

While many are calling for rapid change, government regulations don’t fluctuate with the times.

Among the things preferred are:

These are enough to make many parents seek out European brands.

To be clear, importing European baby formula for commercial use is not illegal. That being said, it is very difficult to do so while staying within the legal boundaries of the FDA. This has created a ‘black market’ of sorts for infant formula brought to the U.S. through alternative means - making it illegal.

There are multiple dangers related to this that go beyond getting formula seized by the CBP.

If you truly have your heart set on European formulas, be prepared to pay a pretty penny to get it imported.

Which Imported Formulas Have FDA Approval?

The FDA does not keep a ready list of approved formulas. There are companies that produce infant formula for multiple brand names as well as different varieties within a brand. Keeping a list is confusing because it would consist of manufacturer names, not the brand names people are more familiar with.

Abbott Nutrition, mentioned earlier, produces the popular U.S. formula, Similac. It also has a factory in Ireland where it has started ramping up production for import. However, not all formulas produced there will be available for U.S. markets.

If you are interested in importing infant formula, look first for the formula. Determine FDA status before beginning the import process. Speaking with a licensed and experienced customs consultant can give you a starting point in your search.

Every baby deserves to eat food that is healthy and safe. Every parent should be able to provide that. Get help from USA Customs Clearance to make both possible.

Our expert Customs Brokers have navigated all kinds of challenging import situations. Get started with a 30-minute, 1-on-1 consultation. You can outline a plan, choose an exporting nation, and begin the legal documentation process.