Importing Rice From India to the U.S. 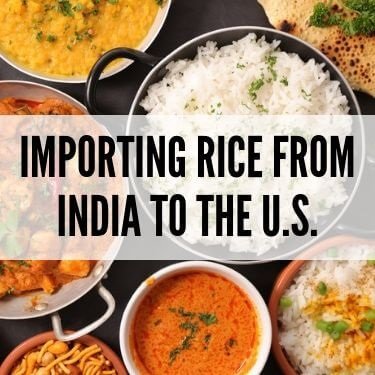 So who can import rice to the U.S. from India? What needs to be done to get the okay for a rice shipment? These questions and more are answered by our experts in this informative guide.
By
USA Customs Clearance
June 26, 2019
Share This Article

If you’re considering importing rice from India, you’re not alone. Rice from India is the foundation of many cuisines around the globe. It’s no wonder that billions of dollars every year go into importing it. To bring rice into the USA from India, you have to make sure you adhere to the rules from the Food and Drug Administration (FDA), the U.S. Department of Agriculture (USDA), and Customs and Border Protection (CBP).

When importing rice from India to the U.S., you’ll need to fill out PPQ Form 587 to apply for a permit to bring plants or plant products into the country. Your shipment will also be subject to inspection at the port of entry. Additionally, you should expect to file prior notice with the Food and Drug Administration and to fill out several CBP entry documents.

Can I Import Rice from India into the United States?

Whether you are allowed to import rice from India into the United States depends on whether you are bringing it into the country for personal or commercial purposes.

Why are Personal Imports of Indian Rice Not Allowed into the United States?

The government is even stricter when it comes to rice from India. Rice from India is outright prohibited in most cases from being brought into the United States for noncommercial purposes.

This is because India is one of the countries known to be home to the Khapra beetle, a destructive invasive species. You are only allowed to import rice into the United States if you are a commercial dealer whose shipment has been properly inspected and declared free of the Khapra beetle.

Importing Rice to USA from India

The importation of rice into the United States involves the jurisdiction of multiple government agencies. Food is one of the most scrutinized categories of imports. The U.S. government wants to ensure that all foods that enter the country are safe, sanitary, and up to all other standards. After all, improperly handled or produced food can cause significant problems for anyone who eats it.

The following agencies have a say in whether your rice is allowed into the country:

To make sure you’ve checked all your boxes, let’s run down the expectations of each federal agency individually.

All commercial imports of foods require prior notice with FDA. When you arrive at the port of entry, Customs and Border Protection will need proof or prior notice (known as “PN”) to release the food shipments at the border. This is in addition to usual CBP entry documents.

The FDA does not approve individual shipments. Instead, the food either needs to have FDA sanction or the facilities that handle the products have to be registered with the FDA.

Customs and Border Protection Rules for Bringing Rice Products into the U.S.

Importing food into the United States is complicated. Because of the number of details, exceptions and intricacies involved, Customs and Border Patrol recommends using a licensed customs broker to navigate the process for you. However, you can handle it yourself instead if you choose.

Customs brokers are experienced in the ins and outs of importing a wide variety of items into the United States, and they will know exactly the documents you need for your shipment to be imported successfully. Licensed Customs Brokers are also skilled at calculating customs bond amounts.

The CBP entry forms needed to be filled out within 15 days of the shipment’s arrival. After 15 days, they will be sent to a warehouse where storage fees could be charged.

The APHIS regulates rice and rice products because these items can carry diseases such as downy, mildew, leaf smut, blight and glume blotch.

The agency requires that rice importers have a permit. You can apply for a permit using PPQ Form 587. This can be completed online, or you can print the form and submit it through the mail.

You should apply at least 30 days before your shipment is set to arrive, as it can take that long for the permit to go through. If you plan to continue to ship the same item into the country, the permit remains valid until the listed expiration date. You don’t need to reapply for a permit every time you have a shipment.

Only United States residents with street addresses in the country can receive a permit.

The tariff or duty that you pay on your rice import varies based on the type of rice or rice products, as well as the country of origin.

Keep in mind: Some shipments from NTR countries might also qualify for special preference programs or trade agreement that would make the shipment free of any tariff or duty.

If your import falls under certain preference programs or trade agreements with countries such as Australia, Canada, Mexico, Chile, Israel, Jordan, Oman, Peru, Singapore, or several others, there is no duty or tariff on the import. You can see the list of special preference programs and trade agreements, and see if they apply to your shipment by looking up the product through the Harmonized Tariff Schedule (HTS).

Countries with which the United States does not have normal trade relations are called “Column Two” countries. As of June 2019, this only applies to Cuba and North Korea. Here the duty rates for rice from Column Two countries:

Invasive Species When Importing Rice from Asian and African Countries

When importing rice from India into the United States, you should be aware of the possibility of bringing in the Khapra beetle. The Khapra beetle is one of the 100 worst invasive species on the planet and can find its way into shipments of rice.

Khapra beetles are native to India but have since spread to areas in the Mediterranean and Middle East, along with other parts of Asia and Africa, according to the USDA’s Animal and Plant Health Inspection Service. They mainly eat grains such as rice, but can also be found in shipments of other food items like fava beans, coriander seeds and dried dates.

Because of their diet, an infestation of Khapra beetles could deplete supplies of stored grains and seeds. They are called a “destructive pest.”

Khapra beetles are known for their ability to survive for long stretches without food and resisting pesticides. They thrive in hot, dry environments, which means they are at risk of settling in places like Arizona, California, Kansas, New Mexico, Oklahoma and Texas if they were introduced to the United States.

The following countries are designated as being infested with Khapra beetles:

If you see the Khapra Beetle in any imported food shipments, the APHIS urges you to report to HungryPests.com.

When planning a shipment to be imported into the United States for commercial purposes, keep in mind that you likely need to obtain a customs bond. A bond is usually necessary if the products are worth over $2,500 and/or another federal agency regulates the items being imported.

Rice is regulated by the Food and Drug Administration and the USDA’s Animal and Plant Health Inspection Service, so it’s probable that you need a customs bond for your commercial import.

A customs bond ensures that the required duties and taxes are paid to the CBP for your shipment. A surety company backs up the bond and agrees to pay any outstanding costs if an importer fails to do so.

To import your rice into the United States, you will have to complete a number of documents. These are the documents required by the U.S. government to allow your shipment into the country:

You should also need the following import documents so that your shipment can cross the border successfully:

If you are interested in importing rice from India for commercial purposes, you are not alone. India is the world’s top exporter of rice. The country exports about 12.5 million metric tons of rice in a year, according to the USDA. That’s about a quarter of the entire amount of rice supplied through exporting worldwide.

In terms of money, India exports over $7 billion worth of rice. Compare that to the worldwide total of about $20 billion. India is truly the dominant in the world rice trade. If you are looking to import rice into the United States, India is a reliable and robust source.

China has been the top importer of rice since 2013, with more than 3 million metric tons coming in every year. China imports rice from India more recently than in previous years. China used to only import basmati rice from India, but it has increasingly permitted imports of non-basmati rice as well.

For a four-year period from 2008 to 2012, India banned the export of non-basmati rice from the country. This was an effort to stem inflation happening at the time.

However, the ban was lifted in 2012, and India became a major player in the global trade of non-basmati rice. Its total rice exports skyrocketed since the ban was lifted, and are now double what they were before the ban.

Despite this, most of the rice coming into the United States from India remains basmati rice.

Should I Use a Customs Broker to Import Rice from India?

When importing rice from India into the United States, it is highly recommended to enlist a licensed customs broker to navigate the process.

Importing food into the United States is notoriously complex. Every different food and country of origin has its own particularities that dictate the process for getting the shipment into the country successfully. Importing rice from India is no exception. A customs broker will have the expertise and faculties to guarantee the process goes smoothly.

When you’re counting on your shipment arriving on time without a hitch, you don’t want to encounter any surprises at the port of entry. An experienced, professional customs broker takes away the guesswork from the situation. They will handle the customs paperwork, deciding the best shipping options and make sure the import doesn’t run afoul of any rules or regulations.

To learn more, use the chat feature or call 855-912-0406 and ask about customs brokers and consulting services.

One comment on “Importing Rice From India to the U.S.”