Explaining The Difference Between HTS Code vs. HS Code 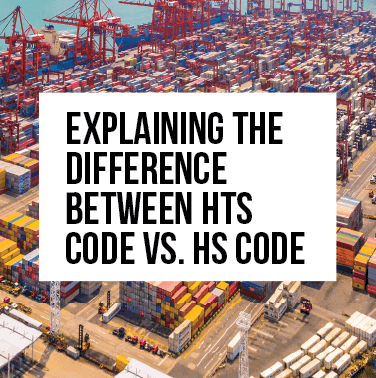 HS codes are universal while HTS codes are country-specific. They are both used to classify imported goods on a global scale. Discover how we can help you find your import codes.
By
USA Customs Clearance
December 3, 2021
Share This Article

Importing goods can be a confusing endeavor, but knowing the correct taxes and tariffs involved can go a long way toward making the process easier. To that end, it’s important to know what a Harmonized Schedule code (HS) and a Harmonized Tariff Schedule code (HTS) are, what their roles are in importing and exporting goods, and the differences between them.

An HS Code is a standardized number associated with a given commodity that identifies that product worldwide. It is a 6-digit number universal to all countries under the International Harmonized System. An HTS code ranges from 7 to 10 digits and provides country-specific product and tariff classification.

Use this article to help drill down on the differences between these two types of codes and how they can help you properly navigate the world of international trade.

What is An HS Code?

An International Harmonized Schedule (HS) code is a series of different codes that can be used to classify various products for international trade.

The first six digits of an HS code also form the basis of a 10-digit code known as a Schedule B number (which are used for exports). These first six numbers are used by both U.S. Customs and all of the other World Customs Organization (WCO) members.

Here’s an example of how these numbers work:

Besides being used for classification purposes, the HS code is also present to help countries compile data for statistical reasons.

What Is An HTS Code?

The Harmonized Tariff Schedule (HTS) code can be looked at in two parts: the first six numbers are made up of the HS code. The additional 1 to 4 digits serve to notate country-specific tariff classification.

The U.S. International Trade Commission administers the HTS code for product classification purposes based on a product’s composition, form and function. For example, if a shipment of coffee beans is to be imported, the HTS code would differ depending on whether the beans in question were coming into the U.S. raw or if they had already been roasted. In turn, the HTS code will indicate the exact tax, duty or tariff rate meant to be collected since it would actually be different in that case.

The Difference Between HTS Codes and HS Codes

Also, as previously outlined, the HS code is a unique 6-digit number that signifies the commodity itself. It makes up part of the HTS, but it is not an exact match because it doesn’t have the additional numbers that make up an entire HTS code.

HS codes are universal while HTS codes are country-specific. They are both used to classify imported goods on a global scale.

Are a Schedule B Number and an HTS Code The Same?

This might be a question that seasoned import/exporters know very well. But for anyone new to international trade, it’s important to note that Schedule B codes and HTS codes are not the same.

A Schedule B number is also used for tariff and product classification, but only for exports. This is also a 10-digit code that gets its basis from an HS code.

Meanwhile, the HTS code — as previously stated — is the 10-digit code used to identify the products being imported into the U.S. Since it’s been described in much more depth in a preceding section of this article, we’ll leave it at that here.

Now that you know the differences between HTS codes vs. HS codes, consider letting USA Customs Clearance help ensure that your international freight can safely and efficiently be imported into the U.S. With the experience and expertise provided by USA Customs Clearance, you can be more confident that things will go off without a hitch.

USA Custom Clearance prides itself on knowing all the rules and regulations involved in importing nearly any type of commodity while also doing its very best to plan around potential delays in the global supply chain.

Our licensed customs brokers can help you fill out the appropriate paperwork, find your HTS and HS codes, and even accept your merchandise at the port or border to make sure it clears customs and keeps moving.

If gaining clarity or knowledge about anything customs-related is your aim, USA Customs Clearance offers import and customs consulting sessions with our licensed customs brokers in either one-time, 30-minute sessions or as recurring monthly meetings. For a flat rate, you get individualized meeting time where you can ask anything you want or receive definitive, correct answers on anything import-related on your mind.

Most commodities require having a customs bond in place before you can even import your freight. If it’s a continuous bond or a single-use bond, USA Customs Clearance can secure that for you.

So whether you know the difference between an HTS code vs. HS code, or are completely new to the importing world, reach out to USA Customs Clearance today at (855) 912-0406 to get free price quotes for these essential services.

Our HTS classification specialists can work with you to ensure your products are assigned the correct HTS codes.