What is the Penalty for Using the Wrong HTS Code? 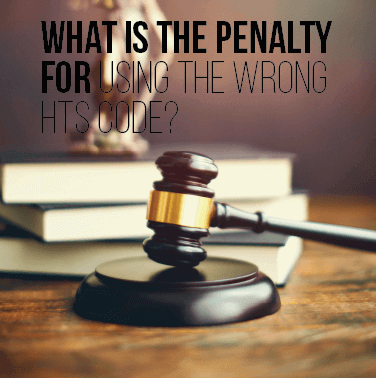 The penalty for using the wrong HTS code varies from fines to seizure of goods. It also varies depending on an importer’s level of culpability and a variety of other factors.
By
Josh Kimble
December 9, 2021
Share This Article

In the world of international trade, customs violations are no joke. Product classification errors like using the wrong HTS (Harmonized Tariff Schedule) code can lead to severe penalties for the importer. Whether you’re a new importer or an experienced trader, it’s critical to ensure that the tariff and product classification of your import entries are correct.

The penalty for using the wrong HTS code varies from fines to seizure of goods. Penalties also vary depending on an importer’s level of culpability - negligence, gross negligence, or fraud - and a variety of other factors. Violations can be resolved by submitting a prior disclosure to CBP and paying any remaining duties.

Our guide below delves into more about customs enforcement, how penalties are determined and how you can resolve penalties for using the wrong HTS code.

Why is it Important to Use the Correct HTS Code?

HTS codes find their basis in HS codes (the International Harmonized System) which were created in 1988 by the World Customs Organization. HS codes create a standardized commodity classification system for worldwide trade. HTS codes are unique to their country of origin and are known as HTSUS codes in the United States.

When an importer attempts to ship goods into the United States, they are required to submit the proper HTS codes for their products. HTS codes are used for tariff classification and statistical analysis and dictate the amount of duty owed on a product. This includes whether or not a product falls under any trade agreements or sanctions.

According to Section 484 of the Tariff Act of 1930, the importer of record is responsible for using reasonable care to enter, classify and determine the value of their imported goods. Doing this allows CBP (Customs and Border Protection) agents to properly assess duties, collect accurate statistics and determine if applicable legal requirements have been met.

By incorrectly classifying goods for entry, an importer is committing a customs violation which can lead to shipment delays, fines, liquidation and other penalties. Additionally, you could end up paying more in customs duty than you otherwise would with the correct HTS code.

Who Enforces Penalties for Using the Wrong HTS Code?

CBP agents enforce the penalties for incorrectly classifying products and other customs violations. The basis of CBP’s enforcement comes from the Tariff Act of 1930. Specifically, section 1592 of the Act (19 USC § 1592) outlines how CBP ensures that customs laws such as HTSUS classification and valuation are followed.

The statute gives CBP the authority to impose penalties for customs violations based on an importer’s level of culpability and a number of other mitigating factors. The statute prohibits the importation or attempted importation of goods through “false and material documents or electronic data” or through “material omissions”.

Individuals are also prohibited from aiding and abetting another importer in committing a customs violation. It’s important to note that customs violations are considered an illegal act whether or not any duty or revenue is lost.

How Does CPB Make Penalty Determinations?

The penalty for committing a customs violation, such as using the wrong HTS code, is determined based on the level of culpability an importer is charged with. The three levels of culpability that CBP uses are negligence, gross negligence, and fraud.

The definition for each level of culpability according to the above statute is as follows:

There are a number of factors that go into determining what level of culpability an importer is charged with. The most common mitigating factors that are considered include:

What is the Penalty for Using the Wrong HTS Code?

Depending on which level of culpability an importer is charged with, the penalty for committing a customs violation when duty is lost is as follows:

Other penalties for using the wrong HTS code include border delays, seizure of products, and even denial of import and export privileges. It’s also important to note that mistakes like clerical errors or mistakes of fact are not subject to these statutory penalties unless there is a proven record or pattern of negligent conduct.

Now that we know what the penalties are for using the wrong HTS code, let’s see what it would look like in practice. In 2018, the average import cost of watermelons was $857 per ton. Depending on whether your HTS code is 0807.11.30 (Watermelons entered during the period from December 1, in any year, to the following March 31) or 0807.11.40 (Watermelons entered at any other time), you would be required to pay tariff rates of 9 percent and 17 percent, respectively.

Let’s say you imported 1 ton of watermelons in August when the tariff rate would be 17 percent, but mistakenly used the HTS code for 9 percent. This would likely be ruled as negligence with duty lost, which could result in a fine of one-half to two times the duty loss. Assuming you get penalized on the lower end, you would owe one-half of the difference between a 9 percent and 17 percent duty on  $857 - coming out to $68.56.

That, of course, would be in addition to the correct duty owed. Altogether, the total cost of your import, including duty rate and fine, would be $1,071.25. These figures don’t include any shipping costs, MPF (Merchandise Processing Fee), or HMF (Harbor Maintenance Fee).

How to Resolve Penalties for Using the Wrong HTS Code

Let’s say you make a mistake and classify your items incorrectly. If you discover your mistake soon enough, you may have the chance to file a prior disclosure with CBP. This will mitigate any potential penalties that would be required by voluntarily offering an explanation for the customs violation and paying the correct duties.

However, this step must be done prior to CBP starting its own investigation, otherwise, the prior disclosure is no longer considered voluntary. It’s worth noting that prior disclosure and an attempt to fix a customs violation can be a complicated issue that requires professional assistance. Importers looking to file a prior disclosure should consider getting legal advice or the assistance of a Licensed Customs Broker before preparing and filing any prior disclosure documents.

If you do not submit this information to CBP and it finds the violation itself, there are several actions it may take, such as starting a formal investigation and sending out CBP Forms 28 and 29.

Typically, the first step taken by CBP is to send you CBP Form 28 (Request for Information). This form instructs an importer to provide proof or an explanation for why duties were not paid for certain goods. Potential explanations include qualifying under a free trade agreement or not being subject to anti-dumping orders. A response must be submitted by the importer of record, in writing to CBP, within 30 days of the date of the request.

A CBP Form 29 (Notice of Action) will be sent when CBP agents believe that a change in classification or increase in duty is required on the goods. This form will be accompanied by two possible actions:

How to Make Sure You Use the Right HTS Code

Ensuring the correct classification of your imports by using the proper HTS code is crucial to the import process. As noted frequently throughout this guide, using the wrong HTS code on your import entries can lead to a number of penalties, both financial and otherwise. Fortunately, there are a number of resources you can use to make sure you’re using the correct HTS codes.

There are a number of free online HTS code lookup tools like those from USA Customs Clearance and the U.S. International Trade Commission. To use them, simply input a descriptive keyword for the item you plan to import and the tool will provide a number of related results with corresponding HTS codes. Products are classified based on their composition, form and function. Make sure you read through the description of each product carefully before identifying your HTS code.

While these tools are useful, they do allow the opportunity for user error. Every item has multiple levels of classification, and some of the classification descriptions can be rather complicated. It’s imperative that you double-check all relevant codes to ensure the one that you select is correct.

What better source to get customs information from than the agency enforcing the rules and regulations involved in importing. If you’ve tried to find the HTS code for a certain product but are having difficulty identifying the correct code, you can reach out to CBP and request a binding ruling. CBP will then give a final determination on the tariff and product classification of your product.

Another option CBP offers is the ability to speak with the agency’s Centers of Excellence and Expertise. The centers are separated by industry and are able to offer advisory classification on imports. While this is not a binding ruling, it should give you a good indication of how your product is classified.

These options are very valuable and can help you be sure that you’re using the correct HTS code. However, like dealing with any government agency, it’s not always the most straightforward or efficient process. You may be required to go through multiple channels before you get the information you need.

Another great option for importers is to speak to a Licensed Customs Broker. Customs brokers are actually licensed by CBP, which means they’re deeply aware of importing rules and regulations. This awareness also includes tariff classification.

The best part of working with a Licensed Customs Broker is the peace of mind that you can have knowing that you’re working with an expert whose job it is to make sure your information is correct. A customs broker can do the heavy lifting for you and ensure that you’re using the proper HTS codes, every time.

Now that you’re familiar with the penalties that can result as a consequence of using the wrong HTS code, you know what to look out for and the importance of working with an experienced customs consultant.

The experts at USA Customs Clearance, powered by AFC International, can walk you through the import process step by step. Our experienced and knowledgeable team ensures that you are using the correct information for your customs entries, every time. We can help you avoid all of the penalties that come with using the wrong HTS code, like fines, border delays, and seizure of products.

Speak with one of our licensed consultants today and get the trusted import help you need.

One comment on “What is the Penalty for Using the Wrong HTS Code?”