Importing Vanilla Beans to the U.S.: Everything You Need to Know 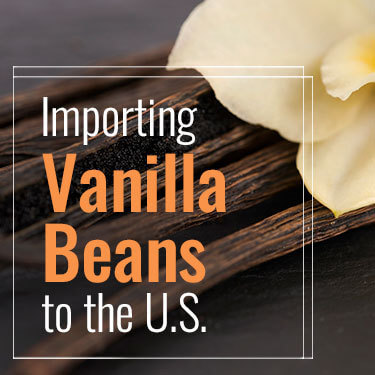 Vanilla beans are only imported from specific countries and are required to comply with FDA regulations. Learn more about how you can start importing vanilla beans to the U.S.
By
Natalie Kienzle
January 25, 2022
Share This Article

Vanilla: the flavor, the smell, the taste; it truly is everywhere. Americans' craving for vanilla has made the United States the number one importer of vanilla beans in the world. That level of demand has made importing vanilla beans to the U.S. a very profitable venture.

The U.S. Food and Drug Administration (FDA) regulates the import of vanilla beans and other vanilla products into the U.S. Vanilla beans require careful packaging in order to prevent damage to the product and loss of flavor. The majority of vanilla beans purchased worldwide are imported from Madagascar.

Continue reading for a simple breakdown on how to import vanilla beans into the U.S. and turn a profit while doing so.

Where Does the U.S. Import Vanilla Beans From?

The top five nations for U.S. import of vanilla beans are as follows:

This list does not include nations from which the U.S. imports other vanilla products.

Vanilla flavor or scent that most people recognize actually comes from a chemical compound known as vanillin. The concentration of vanillin in the bean varies among the various growers. This compound combined with other environmental factors creates the unique aromas of vanilla varieties. Vanilla beans grown in Madagascar generally contain the highest concentration of vanillin which creates a rich flavor that is prized worldwide.

Why is Vanilla So Expensive?

The latter can be produced more easily and at a significantly reduced cost. In fact, the majority of vanilla flavoring in the global market comes from these sources.

The cost of vanilla extracted from vanilla beans is directly impacted by the labor-intensive way it is grown. The majority of commercially grown vanilla beans must be pollinated by hand, flower by flower during their blooming period, which is a window of less than 24 hours. Each pollinated flower will produce only one vanilla bean. To date, no mechanized tool has been developed to make this process any easier.

For this reason, vanilla orchids that produce vanilla bean pods are incredibly difficult to cultivate en masse. Even in the wild, vanilla beans are very rare because they are pollinated by a specific type of bee found only in Mexico and a few other places around Central America.

When vanilla orchids began getting exported to other parts of the world, no other natural pollinator could be found that would allow the bean to be cultivated outside of its natural environment.

In the 1840s a technique was discovered to hand-pollinate the vanilla flower. It was only with this discovery that cultivation of vanilla beans outside of Mexico and Central America became possible. Madagascar and other islands of the Indian Ocean have a climate suitable for its cultivation and have since become the leading producers.

Vanilla is currently considered the second most expensive spice in the world.

Officially, vanilla beans are a vegetable product along with coffee, tea, and mate. Since they fall under the category of ‘food’, the import of vanilla beans is regulated by the FDA. As an importer, you’re responsible for making sure those food products are correctly labeled and safe for consumption.

Since 2002, the Bioterrorism Act requires that importers provide prior notification to the FDA before importing food products. This prior notification allows the FDA to partner more effectively with U.S. Customs and Border Protection (CBP) during inspections. A smoother inspection process is good for you as the importer.

Two ways you can provide prior notification are through the:

Any holds placed on imported shipments are at best an inconvenience to you as an importer. However, when food is involved, those inconvenient holds can become disastrous due to the limited shelf life of food.

Using an experienced and Licensed Customs Broker who can guide you through needed documentation requirements may help get your products out of port and onto customer shelves faster.

Do I Need a License to Import Vanilla Beans?

A license specific to vanilla beans is not required for import into the United States. However, the country of origin may require you to meet specific exporter qualifications.

The nation of Madagascar, for instance, is actively trying to protect its farmers. They ensure the high quality of their product is not diminished by counterfeiters attempting to pass off a mediocre product as being vanilla from Madagascar. Because nearly 80% of imported vanilla beans are from Madagascar, familiarizing yourself with their export requirements is highly recommended.

Madagascar’s Ministry of Commerce maintains a list of authorized exporters. To export vanilla out of Madagascar, you must be on that list.

Other requirements for exporting vanilla beans or other vanilla products out of Madagascar include:

There are also three separate taxes to be paid when exporting out of Madagascar. Regardless of which nation you choose to import vanilla beans from, hiring an expert familiar with international customs is your best bet for a smooth and profitable transaction. Licensed Customs Brokers can provide this guidance.

To avoid mishaps and document confusion, be sure to consult with a Licensed Customs Broker with experience in international trade.

While the vanilla bean itself is a huge import product, America’s sweet tooth means we also import many related products. Some of these products are direct derivatives of the vanilla bean, while others are based on vanillin, the chemical compound that gives vanilla its distinct taste and smell.

To make a truly exhaustive list of all products imported into the U.S. that contain vanilla or vanilla additives, whether as a scent or flavor, you would need to consider everything from puddings and ice cream to candles and hand lotions. The possibilities are nearly endless.

How Are Vanilla Beans Shipped?

The shipment of vanilla beans will depend on where they are arriving from. Some vanilla bean-producing nations have laws regarding how exports of beans should be handled. For instance, many prohibit the export of vanilla beans that have been vacuum-sealed because it is believed the plastic and lack of moisture has a negative impact on flavor and smell.

Consulting with the commerce department of the nation you choose to import from may be the best way to ensure your shipments are in compliance with local standards.

As for arrival in a U.S. port of entry, per the FDA, vanilla beans are a food. As such, labeling, packaging, and shipping must comply with U.S. safety and sanitary standards. The FDA puts forth several regulations regarding the import of consumables, whether for people or animals. Receiving food facilities must be registered with the FDA. The FDA must also be given prior notice before any and all food shipments.

Wanting to make sure your clients get their sweet tooth satisfied? Partner with USA Customs Clearance and consult with experienced and Licensed Customs Brokers for all your vanilla import needs.

Food products only have so much shelf life after arrival. Don’t risk getting your shipment bogged down in transit. A 30-minute one-on-one session with one of our experienced Customs Brokers can provide you with guidance on fee calculation, proper documentation, HTS code clarification, and more.

Protect your investment by getting help from our experts to provide you with clear direction. Give us a call today at (855) 912-0406 for a no-obligation price quote and keep your business moving forward.

5 comments on “Importing Vanilla Beans to the U.S.: Everything You Need to Know”